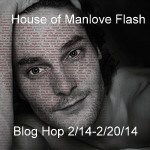 Welcome to the House of Manlove Flash Valentine’s Hop! 16 short stories from 16 romance authors, set in their current universes or from works in progress. That’s 16 sweet shorts over the next week to keep you in a romantic mood!

My offering is a snowy short set just under a year after the events of Flirt. There’s no real spoilers (other than the main couple get together – but if that comes as a surprise to you in a romance novel, you might need to make sure you’re reading the genre you think you are!) though it might help to be familiar with the characters.

The last time Toby had done so much as write a card for Valentine’s Day it had been for his late mother, nearly two decades ago. Trying to plan one for his selkie lover was harder than he’d thought. Haggenby didn’t have a lot to offer, and they’d long since exhausted the romantic possibilities of dinner at the pub.

Flirt’s interest in human holidays had taken him by surprise at first. St George’s day, Father’s Day, Hallowe’en, Guy Fawkes, St Andrew’s day, Christmas, New Years, even Burns Night. He knew Flirt had been raised human, but he celebrated more festivals than Toby had even heard of. Toby wanted this one to be special too, but as the day dawned he was still at a loss as to how to celebrate it. He couldn’t even make his lover breakfast in bed; Flirt was already up and dressed when Toby woke.

Up and dressed and holding a picnic basket.

Flirt put the basket down. “Happy Valentine’s Day to you too,” he signed. “Get dressed.”

They put their backs to the ocean and headed inland. Even now snow still topped the taller hills and lurked in the deeper valleys. The air was crisp, a gentle breeze chasing them through the bare gorse bushes.

They picnicked on the moors, surrounded by naked gorse bushes and dry heather, sat on Flirt’s sealskin and eating crab paste on cold toast. The day grew darker ahead of schedule, but as Toby poured them both another beer he convinced himself no harm would come of ignoring the clouds a little longer.

When the first flakes fell Toby was pleasantly surprised. They were both warmly dressed, and this late in the winter he figured it wasn’t likely to snow heavily. It would be far easier – and more romantic – to walk home in the snow rather than stumble across the muddy tracks in the middle of a thunderstorm.

They packed up at a leisurely pace. Toby kissed the snowflakes from Firt’s eyelashes. And his nose. And his lips. If it hadn’t been so cold he could think of several more places to kiss the flakes from, but though Flirt could withstand freezing temperatures better than any human even he wasn’t keen to strip in the snow.

And there was more of it than Toby had expected, when he pulled back. An inch already, and it was coming down thick and fast.

“We should get going,” Toby signed. “Which way?”

It was hard to tell when precisely they got lost. They walked with their arms around each other’s waists for the warmth, but it was getting harder to move through the deepening snow. Though they couldn’t see the sun, it was due to set within the hour.

After everything they’d been through together, after all the risks they’d taken for each other, dying of hypothermia because of a poorly timed picnic seemed unfair to Toby.

Flirt squeezed Toby’s hip. Toby looked down at Flirt’s hand, then to Flirt’s face. Flirt pointed further up the valley. Halfway up the side of the low hill was a warm glowing light. A cottage.

It took them almost an hour to reach it, wading through snow almost a foot deep. By the time they reached it the world was dark. A road ran from the back of the building up to a road along the top of the moor. If the homeowners were willing to put them up for the night it should be easy enough to find their way home the next day.

Toby rapped on the door of the cottage. When no response was forthcoming he knocked again, harder. Flirt waved him over to the window.

It was a kitchen, all high end appliances and giant american-style fridge. The worktops were clean and tidy, the sink empty of dishes, the only sign of life a newspaper on the kitchen table. Toby squinted at it. It was from last summer.

Flirt frowned at him. Toby switched back to signing. “It’s a fucking holiday home. No one lives here. They’re probably not even from Yorkshire! They buy places like this and leave them empty eleven months of the year. They drive up all the house prices and put all the local shops out of business, then sell up because the area doesn’t have the ambiance any more.”

Flirt nodded sympathetically, while wrapping one hand in his sealskin. As Toby started on the evils of city folk not knowing how to close gates Flirt smiled, nodded again, and put his hand through the window pane.

Toby’s hands dropped to his sides in surprise. Flirt reached through the hole he’d made and unlatched the window. He opened it outward, knocking snow from the sill, and gestured for Toby to go first.

The kitchen light was on a timer and promptly went out just after they entered the building. If it was meant to deter break-ins, Toby thought, it would have worked better if it hadn’t drawn attention to the empty building in the first place. The cupboards were well stocked with tins and dry goods. The living room had an open fireplace and a stack of wood and kindling ready to use. Everything in the cottage was in full working order: power, electric, even the phone. Toby called his dad so he wouldn’t worry, and patched up the broken window with cardboard from a packet of stale cereal.

An hour later they were settled in front of a roaring fire, sharing pasta with tinned tomatoes and a bottle of very good wine. Toby had debated leaving money to cover the costs of what they used, but suspected his small pile of change would be more insult than compensation. Eh. He’d leave a note.

Flirt kissed him. Both of their lips were chapped from being out in the cold for so long. Flirt brushed his fingers over Toby’s cheek, warm from the fire, and pulled Toby in for another kiss. Warm fingers roved under layers of clothing, pushing and tugging and making space. Goosebumps prickled superheated skin. Hands tightened on hips, hips ground together. Flirt gasped, Toby moaned. They came together.

They slept on the sofa, the fire burning low. In the morning the sky was clear and the sun was up. The road over the moors hadn’t been cleared, but it led all the way to the sea, and the walk was brisk but pleasant.

Toby had remembered to leave a note for the cottage owners. It read:

You have our apologies for the window and the food we ate, and our eternal gratitude for saving our lives in the snow. And the best Valentine’s Day we’ve ever had.”

Follow the hop! Free flash fiction from some of the hottest romance authors out there!