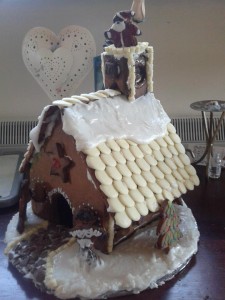 So it’s a slightly belated one, and I can’t say I have any real excuse. Been cosying up to the bf, watching wintery films and eating christmas leftovers. Yeah, we still have some – he made me a gingerbread house for an advent calendar that we’re still chewing our way through.

One problem with the inertia was the number of half finished manuscripts I’ve collected over 2011. A contemporary romance that requires serious editing. A steampunk romance halfway through mutating from a short story to a novella. The roughest of first drafts of a science fiction romance (that will hopefully become a rather smoother second draft shortly). So while I may decry resolutions, I do have a goal or two: I’m hoping all this change will change the statuses of these manuscripts, from drafts into complete.

The contemporary and the steampunk fell by the wayside, but the sci fi romance (still titled Space Romance for lack of a better name!) is about to be subbed any second now, and I somehow accidentally wrote a sequel to Tease, which is currently seeking a BSL deaf community beta reader (anyone know any?). There’s also a gothic horror novella that’s two scenes from completion too. So, not the books I set out to write, but not a bad haul anyway.

So this year’s plans line up as follows:

And if I get all that done, there’s also the second gothic novella percolating in the back of my head (it’d be set in 1630s Venice), and maybe revisit that contemporary romance and the steampunk. And and and…

See, this is why I don’t make resolutions.

In Holidays and Courses, Writing